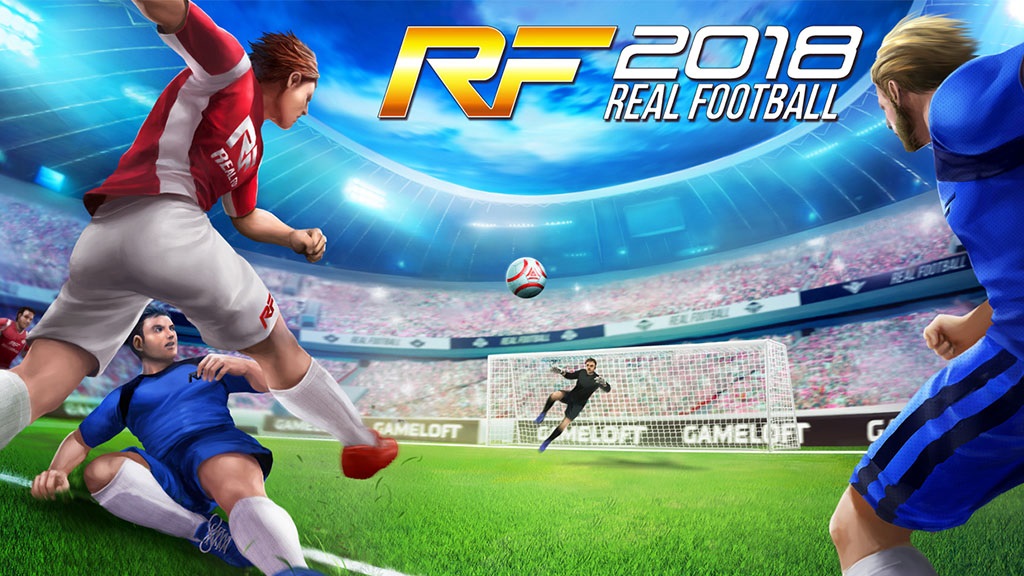 Real football is one of best Android soccer game of many. This game is the most recommended for fans of the mobile version of the football game. The reason is, this game hones talents and strategies that test the ingenuity of the players.

This game seems to invite players to play football in a real version. Although played in the mobile version , this game is different from the mobile version of the football game other . The difference can be seen from the pictures, artistic elements, and is also realistic in achieving scores.

Winning a game is certainly an honor in itself. Especially, if the game has the theme of his favorite football team. Of course the pride is growing. Therefore, must know about the information about the game

Real Football at a Glance

Real football is a mobile version offline soccer game developed by the famous game company, Gameloft . This company is a large gaming company headquartered in Paris, France. Gameloft has branches in many countries, and has spawned many famous games. One of these football games.

Gameloft is the largest gaming company in the world, which never disappoints its players. This is evidenced by the launch of Real football which has been downloaded 50 million times for the Android version. Likewise with the PC version which received the same enthusiasm.

The gamers have always believed, a game that was born from a giant company Gameloft has always had a good quality. Therefore, this football game is ranked in the top 50 in the playstore as the most popular football game .

This game is different, especially for the Android version compared to other games, because it looks more realistic, similar to the appearance of the Playstation console . This provides an exciting experience for every player. They seem to be playing the console version of the game in mobile form .

The big game company in the world really understands the needs of football lovers, by launching the game for the Android version, although some of the configurations resemble the appearance of a playstation.

One of the things that makes Real Football different is the features it has. A big company, Gameloft seems to understand the desires of gamers by continuing to innovate and revitalize its features. Following are some of the features it has:

In Real Football there is a cutscene feature that can be used to learn strategy or evaluate the game that has been done. This feature also makes it easy to retrieve image memory for the best games.

Evaluating team play is very important to do. Especially if the team, will make a match to the world cup. Even though it is only a game, the strategies issued are very possible to be applied in the real world.

Different from other games, this soccer game was specially created by Gameloft for more challenging single versus computer games. That’s because Gameloft has created a higher difficulty level for single games.

The majority of games that already exist, are very easy to play versus the computer. The reason is, the strategy and formation have been well understood by the players. Unlike this game, which offers a more challenging game, even though it’s a computer vs.

Not only Kick Off, but also free kicks also have a more realistic look, because it has been supported by a 3D graphics version for Android. Thus, the game becomes more exciting and challenging, because it looks more realistic.

Imagination of players as if pulled into the real world to do kick offs and free kicks in more life. In contrast to other mobile versions of games that still use computer animation in the form of 2 Dimensions, to do this.

Not just to be a football player or team. This game also provides management features for the football team formed by themselves. Everything is done independently, starting from training, player selection, and also the match schedule. Including the championship to be won. This feature also provides a strategy to face the opponent’s game.

Exciting experience to be had by being the manager of the football team of the dream club. Thus, this game offers gamers something different ,  if they feel bored with being a football team player.

Before playing a match, it is better to do a match simulation to find out the best strategy to win the match, and also know the strategies and tactics to attack your opponent. Thus, it will be very easy to win the game.

Several advantages can be obtained by playing simulation games. Moreover, if the gamer is fairly amateur to play football games. Thus, this feature can at the same time teach how to play the correct technique to win the football match.

Although each game has different features and also has its own advantages and disadvantages, the features found in Real Football are perfect for an Android soccer game class. Therefore, it is only natural that this game has a fairly enthusiastic response from gamers.

The features found in Real Football can be used as an alternative choice when facing boredom in playing football which is usually done as a team of players. Thus, allowing the player to assume the role of the manager of the dream football team.

This game was first released in mid 2000 under the name Real Football 2004. Since its inception, this game has been downloaded by tens of millions of users. Since then, its users have continued to increase until it currently reaches 50 million users.

Just like the PC version of the game, this game also has a more real appearance both in terms of images, and the resulting sound. Especially since the first Android version appeared. The big game company Gameloft, comes with creating a 3D graphic display in this game.

The sensation of a challenging and more exciting experience can be obtained by playing this game. The advantage, this game can be played offline and single, when the player does not have a partner. Thus, the game will be more exciting and save more quota.

The Android version of the game was first released on September 29, 2016, at which time Android phones were at their peak. Therefore, Gameloft did not miss to launch this game to meet the need for entertainment in the form of an exciting and challenging football game.

Like the mobile version of the game in general, how to download this game you must first visit the playstore . This Playstore provides the game to download for free. Type in the search box the name of this game.

This game can be downloaded on Android for free, and it only takes a few minutes to download. Make sure the internet connection is available so that when downloading it does not occur lagging, which can make the game look and sound not download perfectly.

Some of the latest features of this game deserve to be one of the best sports genre games for the Android version. Players do not have to participate directly to jump into the green field, but can also become managers for fantasy teams. Real football is one of the best games launched by the world’s largest gaming company, Gameloft. Carrying the Gameloft flag, this game has managed to reap success by having tens of millions of downloads for both the Android version and the PC version.